Whew.
November is over, and with it, National Novel Writing Month. For the second year in a row, I took part and accomplished my goal. It wasn’t easy this time.
Last year, I was working on a YA fantasy novel that was very fast moving and action-packed. I could breeze through a lot of words extremely fast. I succeeded in getting 50,000 words done without too much difficulty, even though it was my first time.
This year, I’ve been working on a much more detailed, elaborate adult fantasy. It’s far more complex, both in world-building and plot. Even though I had much of it mapped out, it was still a lot harder this year to get words down. I actually started it many months ago, and the writing was going very slow.
But having a specific challenge, a target to aim at, makes a huge difference. Along with that comes accountability. By telling people what I was doing, here and on Twitter, I was holding myself to the challenge. If I didn’t make it, everyone would know.
At the halfway point, I didn’t think I was going to make 50,000. I consoled myself with the truth that I would still have accomplished a great deal, regardless of whether the final number matched that 50K or not.
And then things kind of took off. I should thank fellow writer Wayne Thomas Batson for his Facebook group and chat on “Blackened Keyboard Friday.” That really gave me the motivation to get a lot done on the day after Thanksgiving, and then push through to the end. I had to work really hard on the last two days of November, but it was worth it.
I finished November with 50,012 words written. Yay me!
The novel now stands at 110,762 words. Based on what’s left, I’m now expecting it to reach 135,000 or more. It’s hard to say. Here’s why:
This novel is really two stories in one. There are two main protagonists with separate stories that weave together eventually. For one of the protagonists, I am now well into the climax of the story. Her part probably has 10,000 more words, at most. For the other protagonist, I have longer to go. His story needs something else to tie in with the climax and I’m not 100% sure about it yet. Depending on how that works out, I could be done with his story in 20,000 words… or it might be a lot more. It’s very hard to determine right now.
So the story continues into December. I hope I can at least finish by Christmas, but I’m not even sure of that at this point.
These are the things I know:

Time to get back to it! A major supporting character is about to die, and it’s a scene I’ve had in my head for almost a year… 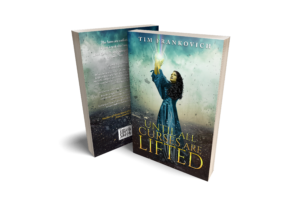 I am now prepared to go out in public. #cobra

Nobody names their kids Spiro any more… #vicepresident

OK, buckle up. I wanna talk to you about Triscuit.

Another important thing to notice while editing: twice I wrote that a one-legged man “got to his feet.” #smh #amediting