My life truly began the day I took my vows as a squire. I worked hard, and my bravery was noted by all those around me. When the invaders came, I stood alone to defend my homestead. This act of valor won the loyalty of my bitterest rival, who from that day on followed me. He became my sidekick, if you will.

I knew, long before anyone else, that my destiny would be a great one. For I was pure of heart, enlightened even, resisting the darkness wherever I found it. That darkness is everywhere, even within corrupt officials who tried to frame me out of jealousy. I resisted their arrest and fled into the wilderness, where I encountered the monstrous wolf that had tormented our region for years.

After slaying the beast, I returned in triumph to my home, wearing the wolf’s pelt as my trophy. In time, I became a leader of men, charging into battle ahead of them all.

And then the Warlord came, with his dark forces, his innumerable minions swarming across our land. In my darkest moment, I saw our king slain and I resorted to the only means I saw of obtaining victory. I sacrificed my own troops in battle so that I could get close enough to the Warlord himself. We dueled at the very gates of the city, back and forth for over an hour as the battle stilled about us.

I emerged victorious, slaying the man who had wreaked such havoc across our land. As his dispirited armies fled, I took my place in the palace and claimed the crown. For was I not… the Hero of Destiny? 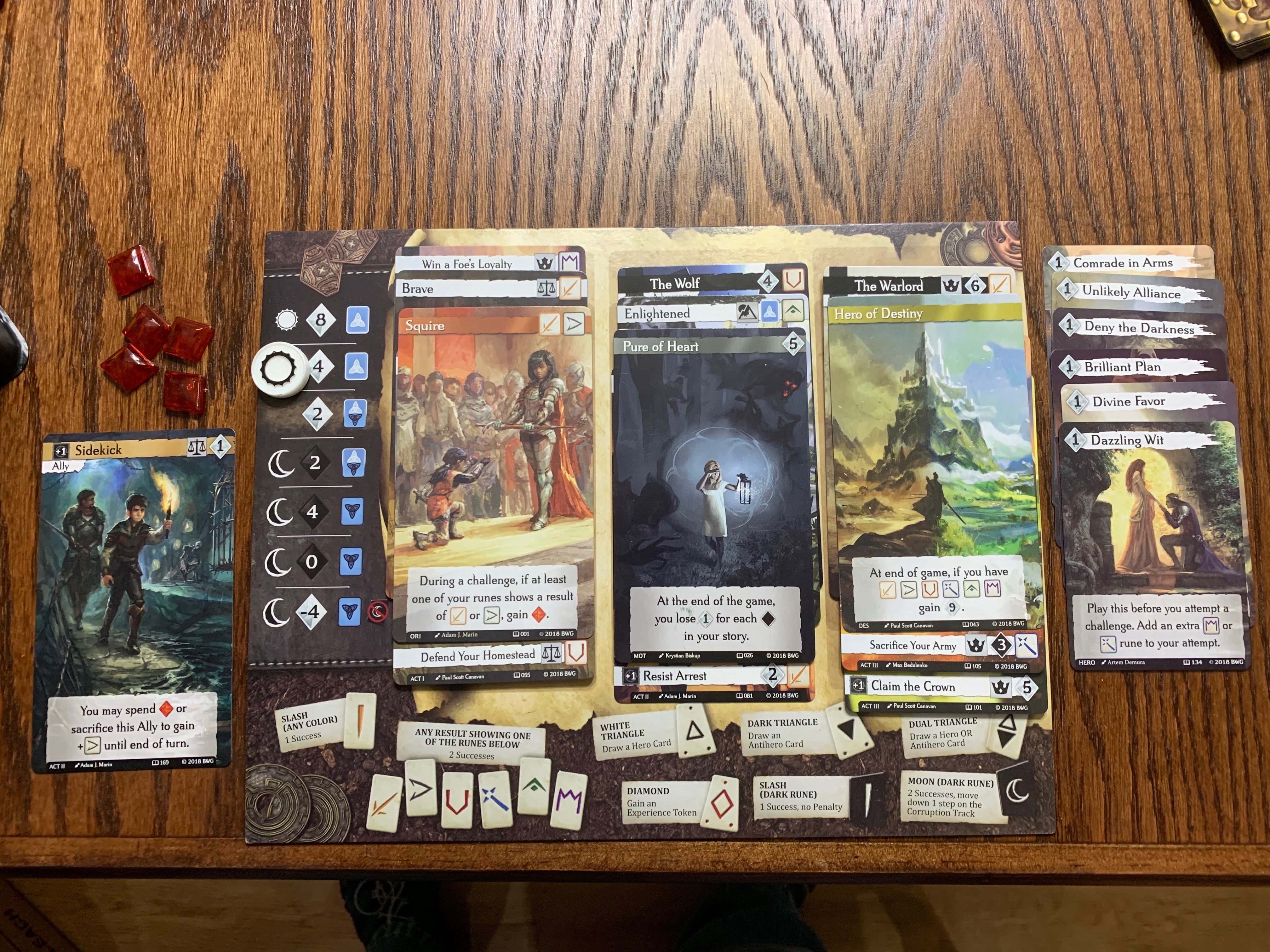 This is but one of thousands of possible stories you can create with the game Call to Adventure. It’s a simple game, but full of excitement and delight. As in the story above, you can soar to the heights of glory as a Hero of Destiny, or be driven to despair as you take the dark path of the anti-hero, perhaps even becoming a Cunning Villain yourself. Or weave a course somewhere in between.

At the beginning of the game, you choose three base cards for your story: your Origin, your Motivation, and your final Destiny. You are dealt two of each of these, so you can choose which you would like to pursue, and find interesting combos. For example, for Origin, you might be dealt Acolyte and Hunter; for Motivation, you might choose between Bound by Honor or Lone Wanderer; and your Destiny could be Paragon of Light or Hand of Vengeance. Which will you choose? That’s entirely up to you. You could note that the Hunter Origin works well with Hand of Vengeance in mechanics and will help you pursue a points victory. Or you might just decide that Bound by Honor makes so much sense, story-wise, to become a Paragon of Light, regardless of the whole “points” thing.

Because that’s part of the beauty of this game. Yes, you can “win the game” by scoring more points than your opponents. Points are awarded based on triumph and tragedy cards, experience, hero or anti-hero cards, and icon set collections. It’s fairly easy to rack up a good score, especially if you’re actively trying. For players who are all about exploiting card combinations and winning at any cost, the game may fall a little short.
But for those who are playing for the experience, the game is brilliant. Winning is desirable, but secondary to the goal of pursuing an intriguing story.

To create your story, you choose from a tableau of cards arranged in front of the players. These cards consist of either Traits or Challenges. Traits are fairly easy to obtain, but are usually based on abilities you already possess. Those abilities are also what you will use to conquer the Challenges. Dungeons & Dragons players will immediately recognize the abilities – strength, dexterity, constitution, wisdom, intelligence & charisma. Taking on a Challenge to Prepare for War, for example, would require strength and/or dexterity. Dealing with an attacker in a Street Fight, could require constitution and/or charisma (because you might talk your way out instead of just brawling).

(I won’t get into all the details of the mechanics. You can find those in other reviews, videos, and the updated rulebook available as a download. The original rulebook, sadly, does leave something to be desired.)

In addition to the base game, you can also play solo versus a specific Adversary card, or even team up in cooperation against an Adversary. I’ve tried both, and while I enjoy the solo play, I much prefer the competitive over cooperative for multiplayer.

My gaming group is very eclectic in what kind of games they like. If you map each of us on the Board Games Motivation Profile, we are all very different. It’s amazing we can find games that we all enjoy, more or less. So far, Call to Adventure is one of those games. In the times we’ve played so far, I haven’t heard a single complaint about any aspect of the game. That’s about the highest praise this group can offer. That, and the fact that two of them want their own copies now, since mine won’t always be there for them.

Every game has been different so far. I do, however, concede that eventually I may get too used to these cards and it might get a little old. Fortunately, that seems to be in the distant future right now. Two expansions are on the way. One is based on Patrick Rothfuss’ The Name of the Wind, and the other on Brandon Sanderson’s Stormlight Archive. These will add many new cards and mechanics based on the specific storylines, magic systems, and so on of those books. While I’m excited to see what those have to offer, I must confess that after playing the game, I would actually be happier to have more “generic” cards like those in the base game. These cards are filled with fantasy tropes that are highly familiar to those of us who have read Tolkien, Jordan, and so many more, or have played other fantasy-style games, whether RPGs or tabletop. I would love to have even more of them.

As a writer myself, I love to compare the interplay of these various tropes, watching how the combine and gaining new ideas myself for future stories. It’s educational about the art of storytelling, even while it’s fun!

Maybe this is not the kind of game that appeals to you. It doesn’t have a ton of strategy. It’s definitely no Twilight Imperium (one of my favorite games of all time). But in this case, story/theme trumps strategy for me. I love it. And I can’t wait to play again.